2 Chefs Fighting Over a Lemon - A Story of Collaboration & Compromise

Did you hear the one about 2 chefs fighting over a lemon? It's a story about Collaboration & Compromise and came up in a recent online training course. We'll let the trainer tell the story. 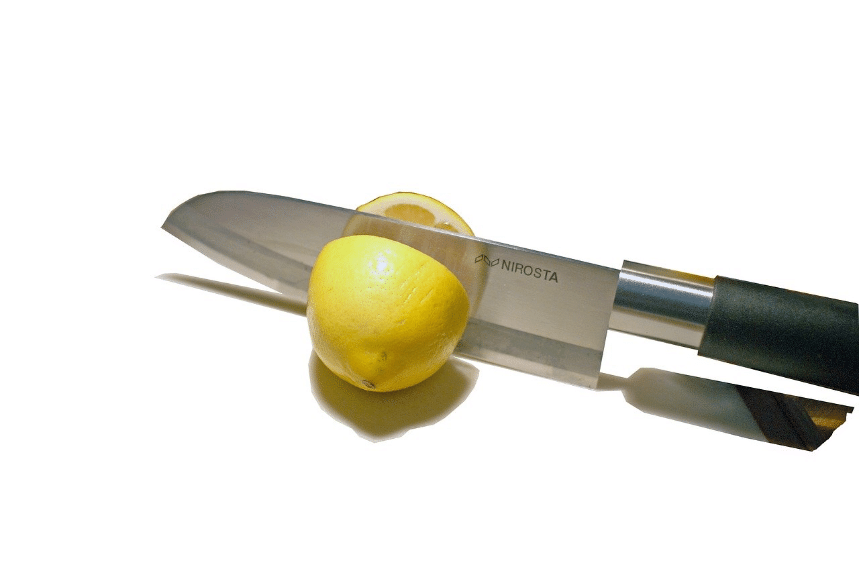 Once upon a time, (in fact, it was earlier today) I delivered an Online Assertiveness Skills Course which, among much else, explored the notion that, when we balance our assertiveness with varying degrees of cooperation, we can actively adopt different strategies which create different kinds of interaction and success.

This exploration stemmed from a delegate sharing an example of a situation in which she found herself agreeing on a compromise with a colleague to make progress on a project where both individuals had different ideas about the best way forward and in which she felt she wanted to be more assertive.

As those of you who are familiar might readily predict, here we looked at the Thomas-Kilmann Conflict Mode Instrument/model so we could compare different styles and their impact in different situations.

It can be useful in developing assertiveness to note that purely asserting yourself without genuine consideration for the other party (Competing) is not necessarily desirable, not to mention effective other than in a relatively narrow band of situations. All too often is it easy to forget that our colleagues or customers are not competitors and that we‚Äôre best leaving forceful competition to tackle the other businesses out there that want some of our revenue or market share. 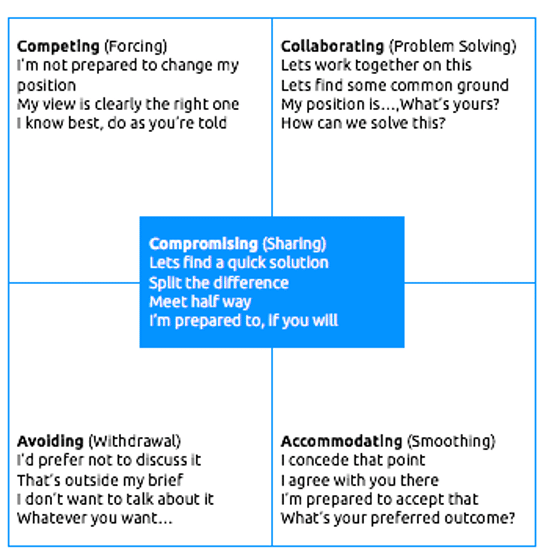 This blog, however, is not about delving into the various ways of interpreting and using this excellent instrument, whether to develop assertiveness or otherwise. No, this blog is about recognising the key difference between Compromise and Collaboration.

When our delegate shared her example of compromise, it was clear that she had lost something.

But, and this is important, it is in the nature of compromise that we lose. It is not a total loss but a recognition that, in order to reach an agreement or decide a way forward, we sometimes need to let go of certain aspects of our wants or needs or give up something about our idea, no matter how strongly we hold the view that we are right. This is because we acknowledge that the other person invariably holds a different point of view and therefore, to some degree, we respect their wants, needs, ideas and views. We are willing to let go, give up or lose, but only if they agree to do the same.

Collaboration, on the other hand, is of a different nature ‚Äì it‚Äôs a whole different ball game when fully committed to by both parties and leads to something different and better emerging as a result; something that neither individual party could have created on their own.

For me this concept is beautifully illustrated in a little story I heard many years ago.

Two chefs fighting over a lemon

Once upon a time, when people were able to freely choose the eating establishment in which they could indulge in their favourite cuisine, there were two chefs who began arguing over the last available lemon.

The first chef was vehement in his demands.

‚ÄúI need that lemon. Don‚Äôt dare touch it. If I don‚Äôt get that lemon there‚Äôll be hell to pay. Keep off!‚Äù

The second chef was equally strong in her demands.

‚ÄúWell, I‚Äôm having that lemon actually. It‚Äôs far more important that I have it, so you keep off. I swear you‚Äôll regret it if you so much as sniff that lemon.‚Äù

The first chef was having none of it.

‚ÄúI‚Äôll say it again, I need that lemon!

I‚Äôm making the starters and that is the first thing our customers are going to taste tonight. First impressions are everything. If we start off on the wrong foot it will be downhill from there. People will complain before we even get to the main course. I need the lemon.‚Äù

‚ÄúI don‚Äôt care about the starter; you‚Äôll have to think of something else. I‚Äôm making the desert and that is the last thing our customers will taste tonight and if we leave the wrong kind of taste in their mouth our tips will be down, we‚Äôll get negative reviews and the whole evening will be spoiled. The lemon is mine.‚Äù

Each of the chefs continued to shout and argue the merits of their case until eventually the manager of the restaurant overheard, intervened and suggested a compromise. He cut the lemon in half, threw each piece back at the arguing chefs and told them to make do and get on with their jobs.

The chefs stormed off to their respective areas of the kitchen and continued to complain to anyone close enough to hear it about how the other chef was being unreasonable and had now created a real problem in delivering their starter or desert respectively. (Picture Gordon Ramsey on a bad day)

Compromise and both may lose

Sometimes when we agree to disagree and have to compromise to move forward it‚Äôs not the agreement that we think about or the progress being made but what we have given up, what we‚Äôve lost or what the other person or party did to us. We tend to see the negative side of compromise more easily than the positive. Compromise can be a win for both parties but in losing out on something, the benefits achieved can easily be overlooked. It also tends to lead to more challenging interactions in the future where battle lines are drawn early and the advantage is sought at every turn. It makes many people more determined to win next time and this isn‚Äôt always healthy in terms of the organisational success both parties are bound by.

Collaborate and both get more

In contrast to compromise, collaboration means that the other parties‚Äô interests are as important to me as my own. This is the fundamental difference between the two approaches. We don‚Äôt hold back or lessen our wants, needs or ideas when we collaborate but we fight equally as hard for the other side too. When we adopt a collaborative approach it means I assert myself effectively, I also encourage you to do the same; not because we need to hash out the different ideas or points of view in order to reach a mutual agreement about which is best but rather in order to allow something new, something different to emerge that neither party had in mind when they approached the situation. Sometimes, ‚Äòlow-grade‚Äô collaboration is really just a matter of respect, conceding a little ground here, offering something in return there, and determining the best course of action by considering all points of view. In this respect, it might be better viewed as ‚Äòhigh-grade‚Äô compromise and as such is reasonably predictable.

It is in openly offering our ideas, curiously exploring others ideas and intentions, challenging ourselves to think differently, listening carefully and pooling resources that something new is created; a solution that is better than either party had thought of independently or was impossible to imagine without this mutually inclusive approach being adopted and followed by both. True collaboration is risky because in opening ourselves up to criticism or by giving away too much information, the other party may see an opportunity to take advantage and change their approach ‚Äì if indeed they were truly collaborating in the first place.

For such a key concept in business success today, I think collaboration often needs re-defining in people‚Äôs minds. It might be nice to work together and combine ideas, but it is just as likely to be difficult, precarious, uncertain and energy-sapping - but for all these challenges the efforts of effective collaboration often bare the most effective fruit. And that reminds me of a quarrel over a lemon that hard already turned sour‚Ä¶

The first chef went back to his work area and immediately cut himself when chopping his half of the lemon so furious was he that his usual knife skills seemed to momentarily escape him.

The second chef squirted the half lemon straight into her eye and banged her elbow on a hot pan, knocking it all over the floor in the process.

As both chefs seethed about the situation, the kitchen hand, who worked for both and who had witnessed everything, stepped in and asked both chefs to meet him outside the fridge. They reluctantly agreed.

The kitchen hand explained that each chef was right to fight for what they thought was important but that there might be an alternative to the compromise which neither liked. He suggested they collaborate instead and briefly explained how they might go about it.

The first chef asked, ‚ÄúWhat is it you‚Äôre making for the desert? You see I really need the lemon for my speciality lemon sole starter and appreciate you want it too‚Äù.

The second chef replied, ‚ÄúWell, I‚Äôm making a lemon mousse and it is really the lemon rind I need for that. You‚Äôre making lemon sole? So, you just need the juice?‚Äù

‚ÄúThat‚Äôs right,‚Äù said the first chef as he grabbed the peeler and lemon squeezer and graciously hand the latter to his colleague with an apology.

No PowerPoint
Yes, you read that right! We‚Äôve removed PowerPoint from our face to face training courses.

Our courses are designed specially for the delivery method to ensure we maximise the tools available.
Less Theory, More Practical
We don‚Äôt spend time on theory. We‚Äôll introduce it but focus more attention on practical tools and ideas that you can actually take away and use.

We‚Äôll provide the theory in your course materials to take away with you.
Clear Pricing
Our pricing is clear. You‚Äôll see the exact price of our open training courses on our site where these are available.

We‚Äôll quote an all-inclusive price for in-house and bespoke work. You won‚Äôt pay a cent more than we quote you.